BGN 15 – a limited number of tickets at a lower price, available while supplies last

Tsena Koev and Mistheria reunite for a joint acoustic concert. Vivaldi Metal Project is an “all-star” project that recreates certain classic compositions in a metal version. The three albums released so far feature works by composers such as Vivaldi, Mozart, Bach, Beethoven, Dvořák with the participation of members of Dream Theater, Symphony X, Kamerlot, Helloween, Death, Within Temptation and others. Vivaldi Metal Project will perform songs from their new album “EpiClassica” as well as hits from their previous releases.

Tsena Koev is a symphonic metal band founded by Tsena Stefanova – the lead singer in the Vivaldi Metal Project live band – and the project’s Bulgarian arranger Zhivko Koev. The group will present in acoustic form their debut album “Emotions In A Jar” and several songs from the upcoming “Storm In Human Form”.Aegonia‘s work includes a series of fantasy novels and atmospheric fantasy music with fairy-tale lyrics. The group will perform acoustically their new album “Moonlight tales”, as well as songs from the debut “The Forgotten Song”, the folk songs “Samodiva” and “Sta da ida maichinko”, arranged for vocals, guitar, bassoon, oboe, violin, cello and double bass.

Freija is a Nordic folk/pagan band from Plovdiv, Bulgaria. Freija’s repertoire recreates Scandinavian folk songs, covers of Wardruna and other Scandinavian bands, as well as contemporary songs on the same theme. The group also creates its own original compositions in Norwegian and Finnish, once again singing the mythical stories of gods and creatures from the Viking sagas. Freija will scatter the Northern Lights with ancient legends and rituals in an epic battle for Valhalla, giving new life to some forgotten plots and values of the past. 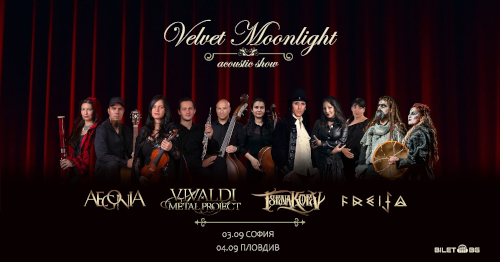